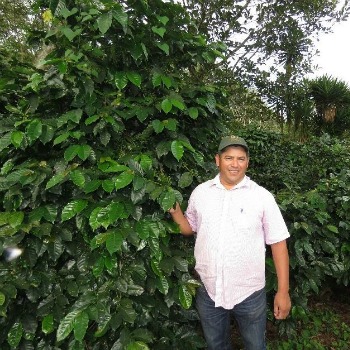 Despite living in a region with nutritionally-deficient from years of sugar cane production, Oscar Omar Alonzo decided to start growing coffee in El Trapiche, Honduras in the mid-1990s. Within three years, through intensive irrigation and tierless attention, Oscar produced his bountiful first harvest. His farm, located near the Doña Dina waterfall, is surrounded by liquidambar sweetgum bushes and picturesque landscapes.

In the early 2000s, Oscar made another bold decision; he transitioned his fields to organic coffee. The transition was not easy. Without the aid of pesticides and other chemicals, initially, his production dropped dramatically. Still Oscar persisted and eventually began producing award-winning coffee. In March 2017, Oscar won first place in the regional Marcala Cup of Excellence competition, placing first with a Geisha coffee at 91.14 points. He renamed his farm “Cual Bicicleta” or “Which Bicycle,” in honor of the persistent need to pedal forward to produce good, clean coffee.